Sophisticated ID card technology for the U.S. and Canada

In both Canada and the U.S., the driver’s license programs are administered by the province or state and used as de facto identification documents for its citizens. For this reason, the credential's security features must be sophisticated, secure and difficult to replicate.

Many Canadian provinces and U.S. states are opting for Veridos identification solutions for their driver’s license requirements, as well as for their ID card, identity verification and health card needs.

Identity theft is on the rise and continues to affect millions of people in North America. In 2020, consumers filed more than 2.1 million fraud reports with the U.S. Federal Trade Commission [1]. The general public and officials are growing more and more concerned about identity-related crimes, with a third of respondents worrying about identity theft, according to an Experian survey [2].

Established presence in U.S. and Canada

Veridos enjoys a long-established presence in North America. In Canada, it has successfully run several identity solution projects since 2007. These solutions include driver’s license and ID card programs for several provinces, including Ontario, Manitoba and Saskatchewan, as well as card programs for the British Columbia Automobile Association, Alberta Motor Association and the International Aero Transport Association.

In the U.S., Veridos produces more than three million driver’s licenses and one million ID cards, providing the local market with both jobs and secure solutions.

In 2018, Veridos acquired U.S.-based E-Seek, which specializes in ID card verification technology and devices. This acquisition highlights our commitment to fighting identity fraud in North America.

Driver's licenses and advanced identity solutions for the US and Canada

In North America, the driver’s license often acts as a primary form of identification. These documents must include advanced security features such as holographic security threads, changeable laser images (CLI), and layered security printing. Veridos’ expertise in delivering such ID solutions protect an individual’s unique identity from card issuance to verification. Its sustainable success in North America is reflected by its increasing market share, expanding footprint and growing recognition.

Get in touch with us to learn more. 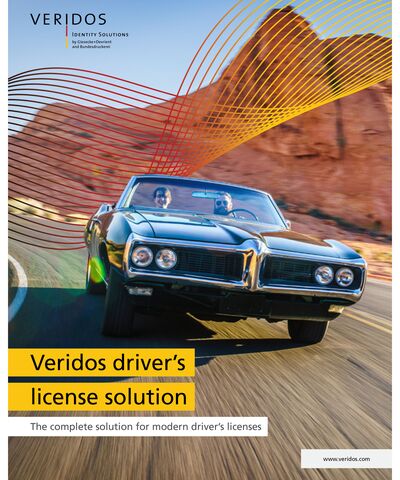